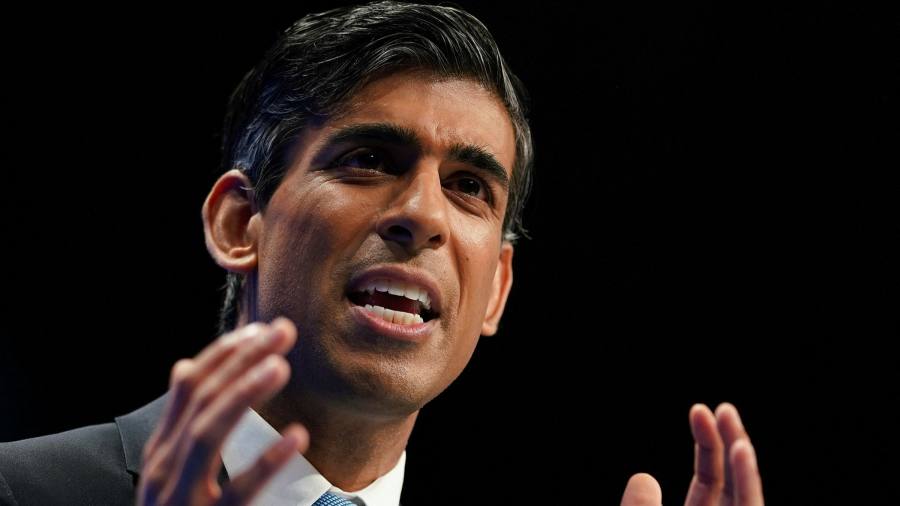 British Chancellor Rishi Sunak believes the specter of an interest rate hike has strengthened arguments for limiting public spending as he begins the latest haggling over three-year budgets with government departments. Whitehall.

Andrew Bailey, Governor of the Bank of England, warned on Sunday that interest rate hikes were underway, which Sunak’s allies see as justification for the Chancellor’s fears over fragile public finances.

“It’s a concern,” said a Sunak ally, speaking ahead of next week’s budget and spending review. â€œHis concerns are being realized. The Chancellor said a one percentage point increase in interest rates and inflation could cost the Treasury around Â£ 25 billion a year.

The Chancellor’s allies insisted he would stick this week to the tight public spending â€œenvelopeâ€ set out in the March budget and later confirmed by Prime Minister Boris Johnson. “The pie is there – it’s just a matter of how you cut it.”

It was not clear who Sunak was thinking of, but Johnson said this month that people have been warning of higher inflation for some time and it has proven to be “unfounded.”

Bailey said on Sunday that the BoE “will have to act” to curb inflationary pressures, without attempting to contradict movements in financial markets which incorporated the first interest rate hike before the end of the year.

As the Chancellor grapples with ministries that did not agree on their total spending before the Oct. 27 budget, a standard Treasury tactic is to paint a grim picture of the economic outlook and public finances.

Among the ministers who are still waiting for more money is Raab, the new justice secretary and deputy prime minister, who wants funding to clear a long-standing backlog in the justice and prison systems, as well as services assistance to victims.

Whitehall officials said the minister’s predecessor, Robert Buckland, had called for a roughly one-third increase in the justice budget over the next three years, to help offset years of cuts to the department.

Kwarteng, who has secured nearly Â£ 4bn from the Treasury to help cut home heating emissions, is fighting to maintain public spending on R&D, which was expected to reach Â£ 22bn by the end of the legislature .

Last week, Johnson sided with the business secretary in seeking “mitigations” for steelmakers and other energy-hungry industries struggling with soaring gas prices, but Sunak failed to sign a OK.

The chancellor told business leaders on Monday he was frustrated with requests for bailouts from companies that should be able to defend their own interests, a person briefed on the meeting said.

Meanwhile, Shapps, whose transportation department has received billions of dollars in Covid-related support in the form of rail subsidies, is waiting for more money to develop infrastructure for electric vehicles, government officials said.

Truss, the new foreign minister, wants more money to focus on the economic and security aspects of her department, although talks with the Treasury are said to be cordial.

This year, Sunak asked the Office for Budget Responsibility to close its forecasts earlier than normal, so that they do not include the improvements in the level of production and growth that are part of the annual reviews of the national accounts.

Since this was revealed by the Financial Times, the Treasury has pointed out that rising inflation and possibly higher interest rates would have increased the cost of servicing the debt in the budget forecast, which according to the government officials. responsible, would have worsened subsequent predictions. .

The Resolution Foundation think tank said the real picture of the budget forecast was the “biggest improvement in economic growth this year” alongside “rising inflation. [that] will tighten both the Chancellor’s loan manna and family budgets this fall â€.

Sunak’s claim that a one percentage point increase in interest rates and inflation would cost the Treasury Â£ 25bn comes from the OBR, but requires some specific assumptions for the number to be too raised.

Other influential figures believe the Chancellor protests too much by worrying about inflation and interest rates.

Speaking to the FT, but not specifically the UK, Vitor Gaspar, head of fiscal policy at the IMF, said that when inflation and interest rates rise, it often comes with a strong economy. and that tax revenues also increase, so that increasing debt maintenance costs should not be viewed in isolation.

The Treasury said: â€œChanges in interest rates and inflation are among the many risks to public finances that we are watching closely. This is why we are taking action to ensure the sustainability of public finances while continuing to support businesses, jobs and public services.