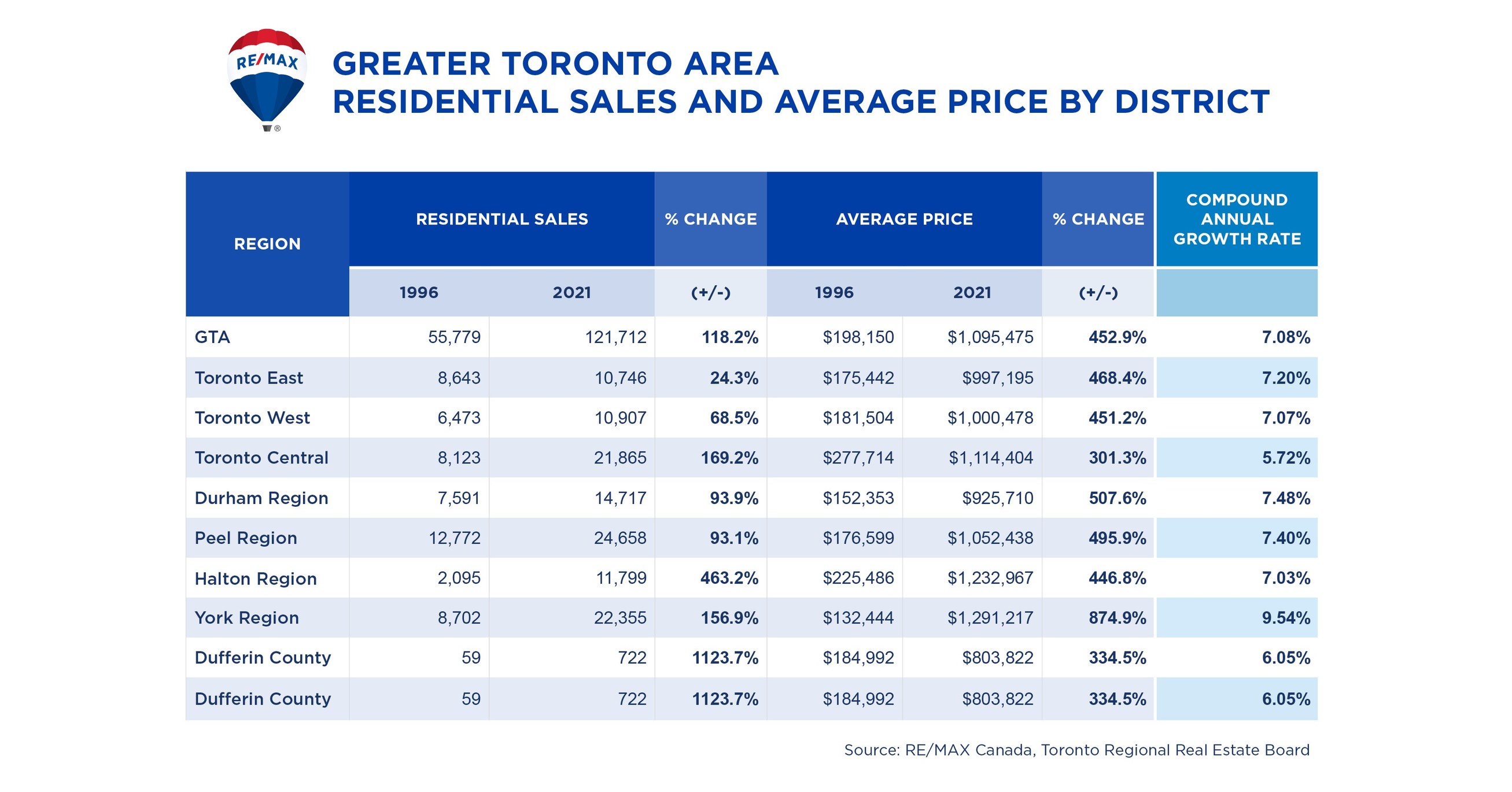 The average price of a home in the GTA has increased by more than 450%, while unit sales have doubled since 1996

MISSISSAUGA, ON, February 23, 2022 /CNW/ — Sales of residential units in the Greater Toronto Area (GTA) have doubled and the average price has risen more than 450% since 1996, as high demand and limited supply continue to drive prices up rapidly in the 416 and 905 area codes, according to a published report today by RE/MAX Canada.

“The performance of the GTA housing market over the 25-year period has been nothing short of remarkable,” says Christopher AlexanderPresident, RE/MAX Canada. This is especially true considering that this period was characterized by the technology crash of 2000, 9/11, SARS, the Great Recession of 2008, from Ontario Fair housing plan and the ongoing pandemic. “Many have raised concerns about the future of housing, given the growing population and scarcity of land in the Greater Toronto Area.”

the RE/MAX Canada Quarter Century Market Report analyzed home buying activity in the nine Toronto Regional Real Estate Board (TRREB) districts that make up the GTA – Toronto East, Toronto West, Toronto Central, DurhamHalton, Peel and York, and Simcoe and Dufferin Counties — and the availability of land, especially in the city’s central and dormitory neighborhoods, has dwindled. This, while migration, low interest rates and affordability continue to play a vital role in the growth of the GTA. Triple-digit increases in sales have been seen in Central Toronto, Halton Region, York Region, Simcoe County and Dufferin County over the past 25 years, while average selling prices have reached new heights in the GTA, with percentage increases between 1996 and 2021, from a low of 301 percent to a high of 874 percent.

New construction has been an important factor in the increase in sales in Halton, Durham, Peel and York, the last two of which are nearing construction. Over the years, the 905 communities have offered affordable alternatives for those looking to purchase freehold properties. Starter homes on smaller lots have attracted many first-time buyers in locations west, north and east of the 416 area code, buoyed by the proposed new expansion of GO train service and a another 400-series highway serving the Northeast/West corridor of the GTA. . The movement brought new life to old communities, forever changing the makeup of towns such as Milton, Whitby, ClaringtonEast Gwillimbury and Innisfil.

“If you build it, they will come, and they certainly did,” says Alexander. “Supported by historically low interest rates, a strong economy, courage and determination, buyers young and old have moved into the dormitories of the city.”

With limited land to build in 905, the focus is now shifting from freehold to high-density homes: landlocked condominiums Mississauga now represent one in two sales, while new condominium developments are planned and proposed for BramptonYork Region (transit-oriented communities) and downtown Pickering.

Over the past quarter century, vertical growth has played a significant role in driving sales numbers within 416, with condominium apartments and townhouses now outpacing freehold sales in Toronto Center, accounting for 76% of sales, according to TRREB data. With the purchase of a large number of vacant lots, parking lots and small commercial/industrial properties, builders and developers are now looking at existing buildings and weighing the pros and cons of demolition. Some have gutted and repurposed existing structures in prime locations, such as the Imperial Oil Building in St. Clair (now Imperial Plaza Condominiums), the former Four Seasons Hotel, and the Sutton Place Hotel (now a residential condominium of 727 units known as La Britannique).

“The GTA’s housing stock continues to evolve based on land availability,” says Alexander. “Builders and developers are facing the harsh reality of a shortage of land, as affordability remains a priority for the vast majority of buyers. While the preference may be freehold, the need to build vertical communities has never been more evident in a city where the population has grown by two million people since 1996 and is expected to increase in the years to come.”

About the RE/MAX networkAs one of the world’s leading real estate franchisors, RE/MAX, LLC is a subsidiary of RE/MAX Holdings (NYSE: RMAX) with more than 140,000 agents in nearly 9,000 offices with a presence in more than 110 countries and territories. No one in the world sells more real estate than RE/MAX, as measured by residential transactions. RE/MAX was founded in 1973 by Dave and Gail Liniger, with an innovative entrepreneurial culture offering its agents and franchisees the flexibility to operate their business independently. RE/MAX agents have lived, worked and served in their local communities for decades, raising millions of dollars each year for Children’s Miracle Network Hospitals® and other charities. To learn more about RE/MAX, to search real estate listings or find an agent in your community, please visit remax.ca. For the latest RE/MAX news Canadaplease visit blog.remax.ca.

Except as required by law, the Company does not intend and undertakes no obligation to update this information to reflect future events or circumstances.

FocalTech: On the behavior of a subsidiary to announce the additional monetary loans granted exceeding 2% of the net worth of the FocalTech group