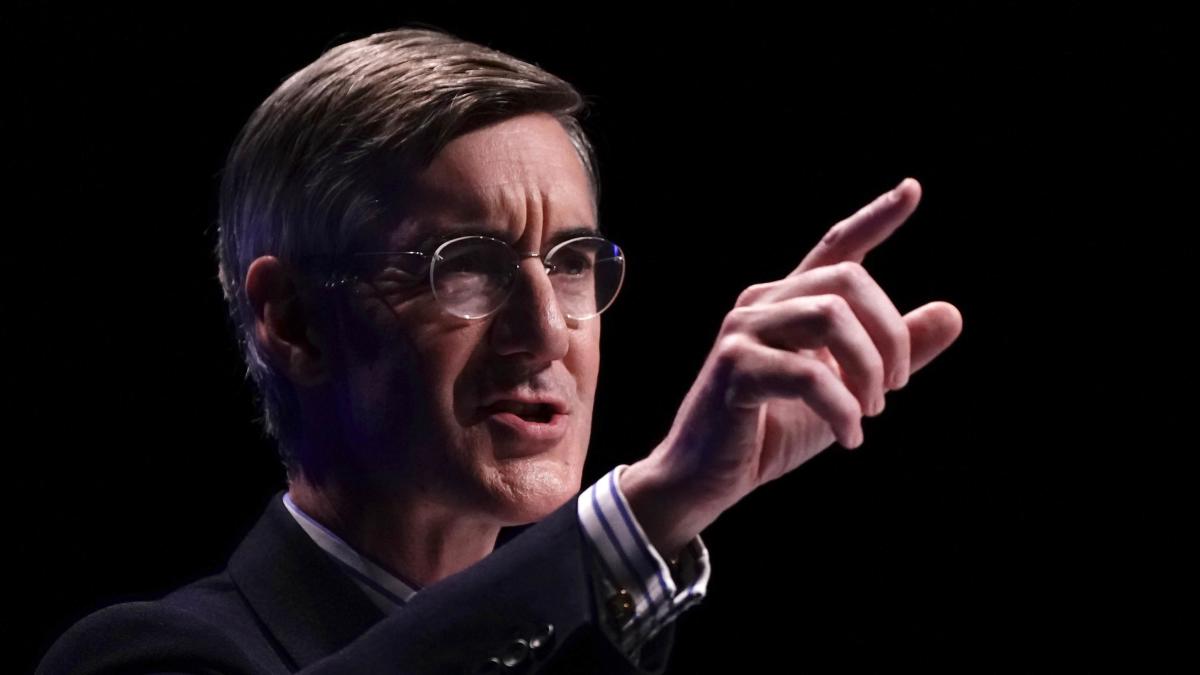 The Bank of England’s failure to raise interest rates in line with the United States is causing turmoil in financial markets rather than Kwasi Kwarteng’s mini-budget, Business Secretary Jacob Rees-Mogg has said .

His comments came as Liz Truss prepared to face MPs as the government battled for the credibility of its economic policies as market turmoil continued.

The Prime Minister will face his first questions in the House of Commons since Mr Kwarteng’s £43billion tax mini-budget was blamed for sparking chaos in the city.

There was further turbulence overnight as the pound fell against the dollar after Bank of England Governor Andrew Bailey insisted his emergency intervention to support pension funds would end this week.

Mr Rees-Mogg insisted he had confidence in the Governor, but stressed the importance of the Bank’s role in ensuring the proper functioning of markets.

He suggested the market turmoil may have been primarily the result of the Bank’s failure to raise interest rates in line with US policymakers, rather than Mr Kwarteng’s Sept. 23 mini-budget.

“What caused the effect in pension funds, due to some fairly risky but unlikely investment strategies, is not necessarily the mini-budget. It could just as well be the fact that the day before the Bank of England did not raise interest rates as much as the US Federal Reserve did,” he said.

He told BBC Radio 4’s Today program that ‘jumping to conclusions about causation does not meet the BBC’s requirement of impartiality’ after presenter Mishal Husain suggested the Chancellor’s actions had been the trigger for fluctuations in sterling and government bonds.

Mr Rees-Mogg said the announcements of the mini-budget as a percentage of gross domestic product (GDP) – a measure of the size of the economy – were “not that huge” and “not out of the ordinary course of events. who come before Parliament.

The market’s reaction was “much more related to interest rates than to a minor part of fiscal policy.”

On September 22, the Bank’s Monetary Policy Committee (MPC) raised rates by 0.5 percentage points to 2.25% – the highest since December 2008 – from 1.75%, in a bid to fight against steep increases in the cost of living.

The day before, the Federal Reserve raised rates by 0.75 percentage points, bringing its benchmark rate to a range of 3% to 3.25%.

Ms Truss is likely to be forced to defend her economic plan, which involves borrowing money to fund growth stimulus, when faced with questions from the Prime Minister.

Britain’s economy contracted unexpectedly in August as factories and consumer service businesses struggled, putting the UK on track to contract overall in the third quarter, according to figures from the Office for National Statistics.

GDP fell 0.3% between July and August, compared to growth of 0.1% the previous month.

Ms Truss will also address Tory MPs at a private meeting of the 1922 backbench committee following a turbulent party conference overshadowed by the U-turn on plans to scrap the rate of income tax of 45 pence for high earners.

This measure was originally included in the Chancellor’s statement on September 23, but was dropped in the face of opposition from the Conservatives.

The Prime Minister and Chancellor are under pressure from MPs on a range of other policy areas, including whether benefits will rise in line with inflation.

Uncertainty in the city around Ms Truss and Mr Kwarteng’s plans has led to higher government bond yields, an increase in the cost of government borrowing and an impact on pension funds.

On Tuesday, the Bank intervened for the second time in as many days to buy government bonds, warning of a “significant risk to the financial stability of the United Kingdom” with “fire sales” of assets if she did not act.

But speaking in Washington, Mr Bailey said there could be no further support beyond Friday and it was up to the funds concerned to rebalance their holdings.

“My message to the funds involved – you have three days left now. You have to do it,” he said.

The pound was weaker against the dollar and the euro on Wednesday morning amid continued unease among financial operators.

The pound fell 0.85% to 1.099 against the dollar. The pound had climbed as high as 1.1180 on Tuesday but fell sharply after the governor’s warning to pension funds.

Debt consolidation: how to get out of holiday debt